On a recent visit to Belgium, I was both challenged and surprised with what I experienced; a restored heritage village whose retail offer was just a bread vending machine, enjoyed gourmet food, drank Leffe abbey beer, visited a castle haunted by a KKK look-alike ghost, had breakfast with pensioners visiting the many scenes from the famous Battle of the Bulge at La Roche-en-Ardennes, hunted for sparking wine in the Grotto de Dinant, make a movie whilst riding on rail bikes and visited the most impressive museum and historical site at the Waterloo Memorial, outside Brussels.

We almost missed the Leffe Museum, hidden behind a curtain and a pair of large wooden doors. 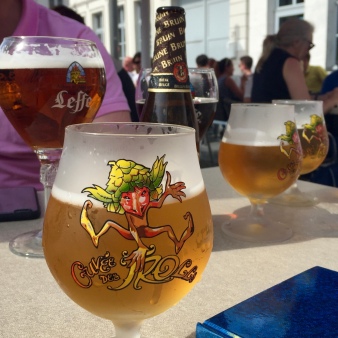 Over 1,000 beers brewed, each with their own distinctive glass

Welcome to Wallonia! The destination that doesn’t really want you to know what wonderful experiences await.

Wallonia, the French-speaking federal region of Belgium, situated between Flanders in the north and France in the South-West. Luxembourg and Germany share its eastern border. It has its own government, parliament and laws in a region made up of complex political, cultural and historical relationships and nuances that impact on a range of policies, languages, tourism campaigns and ultimately what visitors experience. Not on anyone’s bucket-list, we were surprised and delighted with what we experienced.

The urban north (around the Sambre and Meuse rivers), is where most of the population lives with associated economic activity. The heavily forested southern Ardennes hills on the other hand, is less densely populated and a centre for outdoors activities, and is where I travelled to recently to participate in an EU-funded study trip. 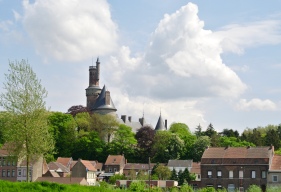 Cycling back into Tournai 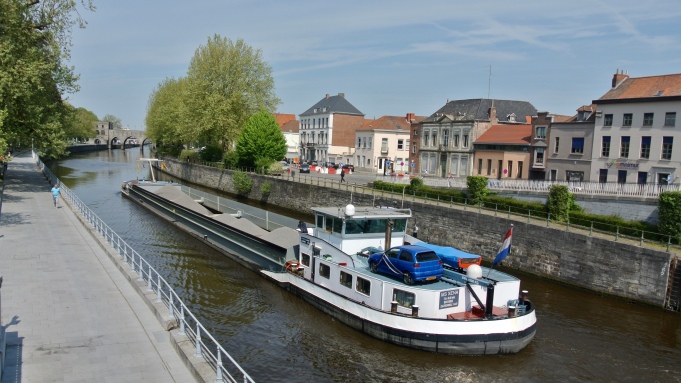 A barge on the River Escaut in Tournai

Based on mining and heavy industry, after the World Wars Wallonia’s heavy industry fell into decline and the region has turned to services and tourism to create jobs and bring wealth. A recipient of masses of EU funding for their developing economy, this has enabled vast amount of capital investment in tourism product and infrastructure, employs 60,000 people and supports 42 tourism offices with approx. 200 staff in the region alone. Eye-watering figures, and hard to imagine anything comparable in the UK. 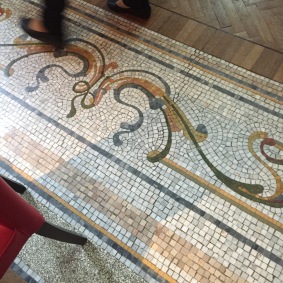 Distracted by the mosaic 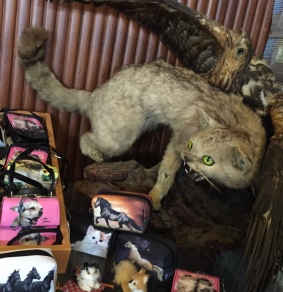 Strange creatures for sale in the souvenir shop

Beautiful windows in an unremarkable building

Our trip was intended to review the provision of outdoor recreational facilities, to share best practice and learn from another European destination, but turned into a topical debate about the role, purpose and value for money the EU funding gives to member states and their regions; money intended to be spent on infrastructure, development and regeneration in the hope of growing local economies and to create lots of local jobs. In many instances, regardless of what the consumer wants or needs. With a group of UK-based tourism destination managers, we visited a range of destinations including a  restored heritage village with the sole retail offer of a vending machine for bread, enjoyed gourmet food, drank Leffe abbey beer in Dinant, visited a castle haunted by a KKK-look-alike ghost, had breakfast with pensioners visiting the many scenes from the famous Battle of the Bulge at La Roche-en-Ardennes, hunted for sparking wine in the Grotto de Dinant, enjoyed a bike ride and visit to the most impressive museum and historical site at the Waterloo Memorial, just outside Brussels.

The visitor centre is underground, so doesn’t alter the landscape.

The EU has enabled enviable tourism infrastructure, that has resulted in the most incredible array of outdoor provision the group had ever seen. What was not clear was how much of this development was based on demand or was even customer-led. We were impressed with the cycling provision however, and in particular the e-bike development that was enabling supplies to reach new market segments and extend the offer.

The captivating Collegiate Church in Nivelle

The EU-funded property that wasn’t’ in fact open to anyone. 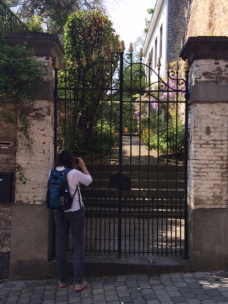 We were unable to reach a conclusion however, on whether or not return on investment or value of money is being achieved as occupancy rates and visitors numbers were shared, but not always capacity . This presents a big problem in the long-term as there is the expectation that the funding pot is deep, and the sustainability of an enterprise does not necessarily need to be argued.

We thoroughly enjoyed our trip, but took home more than just tourism ideas; we took home changed views on our professional place within the EU and re-appraised the challenges we face here in the UK with only tiny amounts of EU-related funding to carry out economic and product development, but with bags of creativity and good humour!

For information on the Wallonia region

2 thoughts on “The great Brexit debate”