A story of battles fought and lost in a far-off land and a horse’s heart buried in Latimer.

A beautiful morning as we set off on our walk along the banks of the River Chess in the Chess Valley. Trees a-flame in their autumnal Sunday best, the scenery captivating. This historic valley has been impacted by human settlement for thousands of years; from the Iron Age, to the first century AD when the Romans began farming arable crops in the valley, to medieval settlements and abandoned churches, to the more obvious manor houses, miscellaneous ruined structures, monuments, tombs and the historic (altered) landscape are evidence of the many human endeavours.

We started our walk at Latimer House, the view across the valley framed by the grazing sheep, the trout beds below us and clouds drifting in from the east. This serene valley and its river, link Rickmansworth and Chesham, in the heart of the Chilterns with the river falling 60 metres along its 11-mile length. The fishery forms two lakes stocked with rainbow trout, while the indigenous brown trout grow large on a ready supply of natural food. We were hoping to see either trout or the famed voles, recently released back into the wild.

Latimer House was once home to the Cavendish family who became baron’s of Chesham, and the 3rd Baron Chesham features further on in this walk. The original Elizabethan house, where King Charles I was imprisoned in 1647 and King Charles II took refuge before he fled abroad, was badly damaged in the early 18th century. The red brick-style Tudor mansion is now a hotel, and was re-built in 1838. The house is true to the Chilterns tradition of red-brick country mansions that suit the landscape well, neither dominating or being dominated by it.

The river is shallow and the gravel bed can be clearly seen with watercress still growing along stretches of the river, but commercial production of this fiery crop has unfortunately now ceased. The River Chess is a chalk stream which springs at Chesham, which along with the Colne and Gade, gives rise to the name of the district of Three Rivers, where it forms its confluence with the Colne at Rickmansworth. They are not raging torrents, nor do they offer picturesque waterfalls or dramatic twist or turns; what makes them so special is that their languid flow cannot be taken for granted at all. They rise from the chalk aquifers, deep underground, where the chalk is like a big sponge, absorbing and storing the water and whose levels are dependent on rainfall and have in fact run dry in recent memory.

The walk continues to the next hamlet at Chenies, where the semi-fortified brick manor house of Chenies Manor and Bedford Arms pub are located.

Adjacent to the Chess Valley footpath between Latimer and Mill Farm is the tomb of William Liberty who died in 1777. A relative of the family of Liberty’s of Regent Street London, and former residents of the village Lee, who left a substantial legacy for the Chilterns, wished to be buried alone and near his mansion on the hill (of which nothing remains). It stuck me as an odd place to be buried, as it is not near any obvious landmarks, until looking around, I could see it was in fact near the spot where the church of St Mary Magdalene once stood. Nothing remains except some raised banks, and walls in amongst the trees, and it’s easily missed, but it was his wish to buried outside of the consecrated church grounds.

Inscribed on the Liberty Tomb.

‘Sacred to the memory of Mr. William Liberty of Chorleywood Brickmaker who was by his own desire buried in a vault in this part of his estate. He died 21st. April 1777 aged 52 years. Here also lieth the body of Alice Liberty widower of the above named William Liberty who died 29th. May 1809 aged 72 years’. 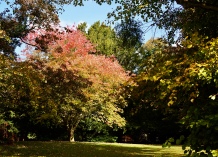 We stop to tickle the horses’ noses and listen to the birdsong along the valley before cutting up to walk back through the chocolate box hamlet of Latimer and the extraordinary Boer War memorials on the green that hints of battles fought and lost in a far-off land and a horse’s heart buried in Latimer.

Nols Nieman writing in the South African ‘Die Volksblad’ in 2001 described what he imaged the burial of General de Villebois-Mareuil to have looked like:

“It was a striking scene: moonlight bathed the limestone walls and cypress trees of the cemetery in Boshof as a group of English soldiers solemnly buried a “French general” with full military honours. The man in question was Count Georges de Villebois-Mareuil, the brave warrior who fought like a Boer general in the Anglo Boer War.” Read the article here.

The general’s horse was transported to Britain by Lord Chesham, where it lived until February 1911. Its heart and ceremonial trappings were buried on the village green in Latimer, adjacent to the memorial commemorating those Chilterns-men who had served in South Africa.

‘The horse ridden by
General Georges de Villebois-Mareuil
At the battle of Boshof South Africa
5th April 1900 in which the general was killed
And the horse wounded.’

Even in this tiny corner of England, the scene could not be further from the ruggered South African veld, vernacular and culture, yet, likes threads in a well-worn carpet, our stories are interwoven right across the world and far back into our history, which for me spans both England and South Africa.

The walk is way-marked and there are many interpretation boards with historical and natural history along the route,  pubs a-plenty en route too for walkers to quench their thirst!  Download the route guide here:

Head over to the new Chilterns blog, A Year in the Chilterns.

To find out more about what to do in this lovely area VisitChilterns.co.uk

8 thoughts on “The Charming Chess Valley”