It is the landscape that ultimately determines what is built or cultivated nearby, which industries thrive or die, or how secure a settlement is. The positioning of windmills to capture the prevailing wind and watermills to harness the power of the water are obvious examples; not so obvious is the location of the more humble brick kiln, essential to the successful outcome of any building project. The presence of sand, clay, spring water, nearby woodland, a major road or canal all determined whether or not brick kilns were built. Even a hill made the difference with a downhill delivery of the bricks to their destination.

Located in the beautiful hamlet of Chenies in the Chess Valley, Chenies Manor House was one such building project: formally home to the Russell’s, Earls of Bedford, this 15th century semi-fortified brick manor house so typifies the Chilterns: quietly understated, yet certain of its place in English history and tucked away down a winding country road in a place you’ve probably never heard of. It is here visitors will find several unusual architectural features including; stepped gables, a sunken Tudor garden and an unusual recreation of a turf maze popular in the medieval and Tudor period, window taxes that may have resulted in an odd south-facing south wing which you’d have expected to look out onto the glorious garden, instead it is almost windowless.

Widespread throughout the Chilterns, brick and flint are the local vernacular building materials of choice. Whilst at Chenies, the flint is absent, the colour of the small bricks  varies, from lightish red, to blue and purple, to blocks of enduring deeper red, interrupted by uneven lines of grey or white mortar, unlike the extravagant and fussy shapes that form the 23 striking spiral twisted trademark Tudor chimney stacks. 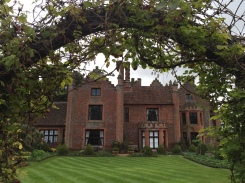 In 1676, Dr Robert Plot wrote in his Natural History of Oxfordshire, ‘About Nettlebed (in the Chilterns), they make a sort of brick so very strong that whereas at most places they are unloaded by hand, I have seen these shot out of carts after a manner of stone to mend highways and yet none of these broke’. There is one remaining 18th century brick bottle-kiln at Nettlebed.

To enjoy another cracking example of the landscape determining the form and function of an industry, I recommend ‘Meet the Vintner with Rocks in his Pockets’.

For further information on exploring the naturally outstanding Chilterns