Rebecca warned us we would become neon sign aficionados. She was right!

A Boneyard, an evocative term not used much these days: it would have once referred to “a seventeenth-century boneyard, a graveyard, the oldest in the city….” for example, and quite out of place in a city as brash and bold as Las Vegas.

A brilliant visit (no pun intended), to the outskirts of Vegas to peruse design and social icons awaited; from the 1950’s through the 1970’s and into the 1990’s in the two-acre campus which is the Neon Museum, featuring more than 200 signs including; Caesars Palace, Binion’s Horseshoe, the Golden Nugget and the Stardust, some even now restored.  Names all familiar to millions who have not necessarily even visited the Strip.

A labour of love, it is enterprises such as these that I have worked alongside in my career who by hook or by crook, have salvaged their cities social fabric. Vegas is not a city that holds onto its past, and it was only yesterday, August 16th that the last tower of the iconic Riviera Hotel and Casino was demolished. I sure the museum director had already been inside to lay claim to any heritage that would have otherwise been lost.

Even the structure that houses the visitor centre has been re-claimed from the Vegas landscape, the former La Concha motel lobby welcomes hot and disorientated visitors from the blazing sun and Nevada desert dust.

What has evolved from a passive collection of ‘old signs’ in a boneyard, is now an active campaign to to not only preserve a fragile heritage, but to celebrate this cities unusual social fabric. Devilishly expensive to repair and restore, this small organisation does a fine job of campaign, capture and interpretation. Our guide Rebecca, an enthusiastic local,  could have reeled off a lot more information than our one-hour slot allowed. Rebecca warned us we would become neon sign aficionados. She was right! For the rest of our trip, we spotted signs, commented on photos of signs and took even more photographs of signs. What a joy!

For over 50 years, the iconic ‘Welcome to Fabulous Las Vegas’ sign welcomed visitors to Vegas. Designed by Betty Willis at the request of Ted Rogich, a local salesman, who sold it to Clark County Nevada, this Las Vegas landmark, funded in May 1959 and erected soon after by Western Neon, was her most famous work. She did not however, earn a cent from her work as it was never copyrighted and now appears in all sorts of horrendous, car-crash interpretations across the city. For $9, you can even buy  pictures of tourists queuing up to take their selfies under the icon!

Although visiting is quite restrictive in terms of only being able to explore as part of guided tour, booked at least one month in advance, and for it being a fair distance from the tourist hotels on the Strip, but those who persevere, your reward will be great.

The Museum also includes nine restored signs which can be viewed as public art and visited on a self-guided tour whenever you have some casino down-time. The open air gallery includes the Lucky Cuss Motel, the Bow & Arrow Motel, The Silver Slipper, Society Cleaners, Binion’s Horseshoe, the Normandie Motel, the Hacienda horse and rider, the Landmark and 5th Street Liquors.

StarDust sign, styled as something futuristic to chime with the atomic bomb testing in the nearby desert 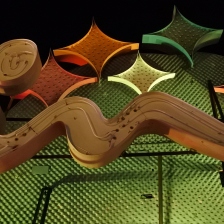