People visit townships for a variety of reasons. For us, it was to re-acquaint ourselves with what Cape Town has to offer the visitor In our roles as UK and USA Reps for Cape Town Tourism. We were invited to explore the unexpected Cape Town and experiencing the townships formed a key part of this brief.

Browse any tourism website and the same words are widely used; sustainable, projects, reality, authentic, real lives, genuine, crafts, meeting the locals, engagement, helping communities etc. We were intrigued, as what does this say about the rest of the destination? That it is all fake?

People have been visiting impoverished areas of cities since the late 18th century, when ‘gentlemen of means’ travelled the distance from west London into the docks and associated slums in east London to see how the locals lived. They wrote in their journals about the living conditions, the smell and of children left to fend for themselves whilst adults worked in the nearby factories or docks.

What is not recorded however, is what the locals thought of these visitors poking about in their homes and neighbourhood.

So it is around the world today, and tourists pay good money to experience Favela tourism in Rio, Slum tourism in Delhi, Hutong trips in Beijing and Township tourism in South Africa.

We had a full itinerary and already were overwhelmed with new experiences and it was only about to get better. On our first evening in Cape Town, we were heading off with Michael from CoffeeBeans Routes to dine with Sheila and listen to Cape Town jazz at her home in Gugulethu. It feels awkward visiting someone’s home whom you don’t know, but Sheila, Tete, Lateli and Itumeleng soon made us feel welcome. The evening was unexpected for so many reasons; the conversation over the home-cooked meal of local vegetable dishes and ‘chicken a-la Sheila’ with our group of ex-pats and a family from Gauteng, who all went back for second helpings – and of course the musicians. We slipped away to chat with Sheila who introduced us to her sister-in-law and 90-year-old father, who we couldn’t help but think looked like a younger Nelson Mandela! This was all about access and experiencing new things – surely what travel is all about?

The second stop on our jazz safari was to a music club with the unfortunate name of 021 Swingers, so we were apprehensive about what lay in store – but it was only more jazz. A strange venue, this time to count the locals vs the many tourists and when the band leader opened the set by welcoming visitors from Germany, American and England, we knew we weren’t among locals.

The flavours and fabric of Cape Town were slowly being revealed. Beneath the smart exterior of a busy, cosmopolitan city we were discovering the many layers that have gone into the making a modern city and its people. Our next stop on the unexpected was a walking tour with Deon, our guide on the ‘Sex and Slaves in the City’. At times uncomfortable, but only because the subject matter was difficult and the attempts at theatre did it no justice. What this tour did successfully, was expose the dark chapter in Cape Town’s history of slave trading, how the slaves lived and died and how important they were to the survival and prosperity of the new colony. Records exist of the first slaves who were imported from Bengal, Angola, Mozambique and Benin. And of Eve, a five-year old girl from Madagascar among them. A number of buildings used by the slaves, and their masters can still be visited, including the Slave Lodge, St Stephens, Slave Church Museum and Slave school. Perhaps too much to see in two hours, as it certainly left us wanting to find out more. 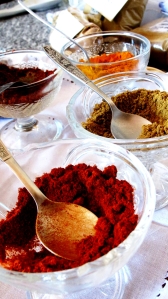 It was time to return to the cobbled Bo-Kaap streets as we had an important lesson; cooking a Cape Malay curry. We were welcomed with a delicate glass of faloodah – a traditional, lightly rose-scented milk drink – by our host and cooking star Jasmina. A life-long Bo-Kaap resident who was keen for us to get our hands full of chickpea flour, whilst regaling us with stories of her family, cooking traditions and how we had all been making our curries incorrectly! Flavours and names of local ingredients washing over us as I battled to fold my samosa; jeera, barishap, koljander and dhanja. Despite having just eaten lunch, we had no hesitation in getting stuck into the fruits of our labours – samosa’s, roti and a chicken curry, all washed down with a glass of homemade lemonade. Real travel is about story-telling and that is what we were experiencing here. Our small group of cooking ‘guests’ were as different as the spices Jasmina had introduced us to, but we could not have felt more welcome in her home and around her kitchen table, and it was a pleasure to experience such warm authentic hospitality.

We were despatched with recipes and spices so that we could cook this wonderful food at home, although we may have to have a satellite link to Jasmina’s kitchen.

It’s a pity we weren’t able to visit the fascinating District Six Museum, established in 1994 and working with the memories, experiences and history of those involved in the forced removals of 1966 when 60,000 local residents were forcibly removed to the Cape Flats, and their houses in District Six flattened by the bulldozers and much of the rubble taken to the Waterfront and used as landfill. It would have given greater context and depth than from the backseat of a tourist bus.

Our guide Norman, from Roots Africa Tours, tells us that ‘shanty’ is from two old Irish words; shan – old and ty – house. Khayalitsha on the other hand is a local word and means ‘new home’, likewise Langa which means ‘sun’.

The Guga S’Thebe Arts and Cultural Centre in Langa is carefully decorated with ceramic murals and within we found artists creating ceramics, water colours and textiles. We visited Sandile Mdekazi’s mosaic studio, and watched him work on new pieces to be sold in the cultural centre and he hoped, further afield. We also visited the Pilane ‘Go Well’ project that was established in 1995 in Khayelitsha to teach women traditional weaving skills and to then be in a position to start their micro-businesses. Guess who dived into the shop and emerged with armfuls of goodies? We did wonder how many of these products find their way onto the shelves of the shops in the Waterfront for example? And amongst the bland mass-produced retail offer in the departure terminal at the airport?

We drove around mostly, it was Deon our photographer who hopped in and out of the bus to take photographs, and we watched as women prepared offal for the cooking pots at the roadside. We didn’t get out as it felt too intrusive as they were working, earning a living and didn’t need us getting in the way. Local involvement was minimal.

By now we were getting hungry, and it was time to visit a restaurant that has appeared in the media around the world – Mzoli’s. Fine dining it is not, but if you are fan of braaied (barbecued) meat, then this will be your idea of heaven. Busy busy, on a Friday afternoon, the weekend had clearly started early, and the locals were seated around big platters of meat smothered in BBQ sauce. Dotted about where a few conspicuous tourists, tucking into the local delicacy cha-ka-la-ka with pap – the vegetarian option! This is an experience that is at the coal-face – nothing extra is added because you are a tourist. This is township life and it represents a place to eat local, with the locals and to pretend for a moment you are a local.

Mzoli Ngcawuzele deserves a mention here as co-founder of the Go Glam in Gugulethu wine festival, an event that the press release says brings together wine famers, retailers, celebrities and festival goers. Rich pickings potentially for the wine producers and retailers, but what of the locals?

‘Township tourism’ in South Africa is surely a sector with huge growth potential but somehow seems hindered by a lack of innovation, transparency and wider local Cape Town involvement. This blog is not intended to offer solutions, but to share our professional experience, and to perhaps start a debate amongst those businesses involved in this sector.

These are some of our observations:

Is it the role of the DMO’s, tour companies and foreign tourists to break down the barriers that exist between various local communities?

Where are the economic figures that demonstrate the long-term viability of the sector?

What do the customers think and what are their expectations?

What are the views of the locals? Do they enjoy any direct benefits?

Our experience of some of the tours was content and knowledge shared that was aimed at first time visitors and didn’t seem to challenge our perceptions in any way.

The Rainbow Nation is no longer new, and democracy – great as it is – is 16 years old. What about people’s lives today?

Visiting a township, with tiny streets in a tourist minibus made us feel conspicuous and even more so that we didn’t belong there. In Hutong they use local rickshaws.

How are the local artists and crafters accessing the main souvenir outlets in Cape Town? Disappointed to see so many imported mass-produced or high-end souvenirs in the main-street shops.

The issue of safety, and how to be honest and helpful, without damaging business.

Inclusive pricing doesn’t seem to be in evidence. Where is the added value?

Greater transparency over which places are chosen to support and information given to customers when they leave so that you can continue to communicate and perhaps build relationships.

How much goes back to the community? If your business is supporting local projects, then say so.

What role is there for business and incentive tourism groups? What do they bring to the mix?

What links are being between established mainstream heritage products (which there are many), and the contemporary township life?

Your views would be most welcome, so please comment below.

3 thoughts on “Township Tourism. What’s in a name?”