I sometimes wonder if visitors who are in east London think they are there by accident, or have been mistakenly sent there by their friends or hotel concierge who are playing some sort of cruel joke.

I tend to find myself on a busmans holiday whenever I set off on a day trip and this blog is about a recent excursion to my old stamping ground in east London, where I had previously worked for eight pre “Olympic hype” years, slogging away at developing a recognisable visitor economy. I naturally expected the day to be littered with familiar views, insights, lots of coffee and sharp intakes of breath as I experienced the pointy end of the London tourism wedge.

This trip was under, over, on and alongside the River Thames, and would be a chance to experience the Olympic legacy. We set out to explore the Emirates Air Line (EAL) aka – that cable car over the Thames – and visit the Crystal with it’s chipper “explore tomorrow’s cities today!” strapline and then to take a river boat to Maritime Greenwich to visit the venerable Cutty Sark.

It’s been six months since the hot spotlight of the world’s media blazed on London and in particular, on the Olympic venues in and around east London. A heap of money was spent making sure the city was looking at it’s best – and the cleanest, so I was keen to see how much of this glory remained for those visitors exploring new frontiers.

Leaving the tube at North Greenwich in the wake of a group of women wearing impossibly high shoes confirmed that this is no longer somewhere you could only reach by bus, bicycle or on foot therefore needing more durable footwear.

The EAL is a curious case; the first ever commercial sponsorship of a mode of public transport in London, to be known by it’s sponsors name and be identified as such on transport maps and apps. Integrated into the Oyster card pay-as-you-go system, it has it’s critics who say it’s an expensive, impractical solution to cross-river transportation that only fools and tourists will use. But don’t knock it before you’ve tried it.

And we were off! As we passed the O2 Arena, we noticed a group of overall-clad people high up on the roof and wondered how business to the Shard at London Bridge was going. Recently opened to much fanfare and fine views, the ticket prices will however, inflict punishment upon your wallet. Ahead of us we could also see the Orbit, located within a stone’s throw of the Olympic stadium, is yet another new visitor opportunity to enjoy yet more London views…but views of what exactly? With this marked increase in the number of London venues you can climb up, hang off, enjoy a glass of wine in, or whizz over, must surely be giving them all a run for their money? The London Eye, the first and most established viewing experience, offers close-ups of Big Ben, the Houses of Parliament and other familiar London landmarks. Visitors want to feel reassured that the money they have forked out to see this view, is going to be well-spent and I couldn’t help but sense that our fellow EAL flyers seemed baffled by what they were looking at, seeking familiar landmarks to help them through their tick-list of London sights. From out of the window we could see a huge flock of seagulls swirling around and wondered what maritime feast they were enjoying. Until the large rubbish-filled skip came into view.

Overheard: “it’s all so grey and brown down there”.

It was comfortable, it wasn’t raining and we weren’t left dangling 54 metres above the Thames with a car-load of over-excited children (they were in the car behind us), but the premature ‘in-flight’ announcement “good bye and thank you for travelling with us today” as we are still high over the Thames was disconcerting and left us unsure how it was supposed to end. With us getting wet I expect!

The Crystal, a sustainable cities initiative by Siemens, was dull dull dull. In other words, good for school children who have to learn about making greener cities and putting right what their parents have messed up. Free to visit, I’m always suspicious of big corporates who open a visitor attraction and it reminded me of those soulless temporary exhibitions spaces that would announce the imminent development of a new housing estate back in the 90’s. How un-London it all looked as we chewed on our sustainable artisan refreshments, and gazed out of the windows.

The ‘on the river Thames’ part of our journey was a very pleasant trip on the Thames Clipper down to Maritime Greenwich. I love being on the River; the views, the slightly menacing water, the old wharfs, that sick feeling as you regret that last refreshment stop.

We were at the Maritime Greenwich pier before any serious damage could be done and we joined the back of a long queue to buy tickets for the Cutty Sark, which according to my friend’s calculations, was just taking far too long (she is a bit of an expert in these matters). Taken by surprise and just a little bit suspicious, we were given tickets by a kind German lady who must have taken pity on our puzzled faces as we tried to figure out the admission pricing – I still don’t understand what tickets she gave us, but they saw us ushered inside to stumble around amongst many wooden boxes of tea, an audio visual on tea, light boxes with pictures of tea, and tea interactives. Despite being built in 1869, curators seem only to have only found one good story to share – that of the witch Nannie Dee and the horses tail she carries. Intrigued? You’ll have to go there. So many possibilities. Wasted. A cabinet drawer with a pig turd contained within does not a pleasant exhibit make. What is impressive however, is the much-photographed belly of the ship as visitors walk beneath it. It’s unnatural, but it’s good. 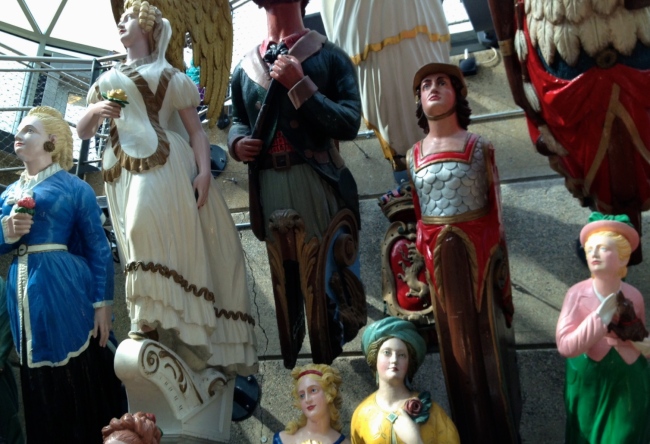 Perhaps the real legacy is that there are now so many visitors in east London, travelling around with ease and armed with an Oyster card, you can go anywhere. In impossibly high heels. Just keep your eyes peeled for kindly German ladies offering admission tickets.